Coronation Street 27/03 - Will Ken Push Peter Off The Wagon?

Devastated by Peter’s apparent betrayal, Toyah takes comfort from Leanne. Peter begs Leanne and Simon to hear his side of the story and assures them he hasn’t touched a drop of alcohol and the affair with Chloe is pure fantasy on her part but they refuse to believe a word. Peter rails at Ken, accusing him of wrecking his life. Desperate to prove his innocence, Peter begs Chloe to stop playing games and set the record straight. Will Chloe agree? Toyah meets up with Toby and tells him she’s left Peter. As she climbs in Toby’s car, Peter watches, gutted. At his wits’ end, Peter marches into the Rovers’ bar and takes a bottle of whiskey.

When Daniel tries to talk to Sinead about her miscarriage and suggests she should see a doctor, Sinead insists she’s fine and hurries out. Daniel confides in Ken that Sinead’s had a miscarriage and he feels partly to blame because of all the stress he’s caused. Ken masks his guilt.

Tracy rows with Ken, accusing him of putting his real kids before her and Amy. In the community centre, Amy prepares for her violin performance. Telling Tracy she’s forgotten her rosin, Amy slips back home. Amy makes a call and leaves a message saying she’s leaving the money behind the clock, everyone will be at her recital so it’ll be safe to collect it. But as she goes to place the money, she’s thwarted by Ken’s arrival. What is Amy up to?

Todd continues to poke fun at Phelan but when he makes a joke about the spirit world, Phelan flips and shoves Todd up against the wall. Is Phelan’s conscience getting the better of him? Ken tears a strip off Phelan for taking so long over the kitchen and points out that he should be grateful for the work when most people wouldn’t give him the time of day. Phelan seethes.

As Peter eyes the bottle of whiskey longingly he reaches a decision. Will Peter return to the bottle? Toyah ruefully admits to Toby that Leanne was right about Peter. But as he drives her home to collect her belongings, Toyah has a sudden change of heart and decides Peter needs her. Can Toby convince her otherwise?

As the recital starts at the community centre Amy slips away. Luke and Tracy search for Amy in the ginnel, unaware of a figure watching them from the shadows. Adam skulks outside in a baseball cap, his eyes fixed on No.1. In the street, Tracy’s relieved to locate Amy, who claims to have suffered stage fright but glances shiftily towards No.1.

Ken’s in turmoil after rows with Peter and Tracy, and dealing with the weight of Daniel’s pain over the loss of Sinead’s pregnancy. Meanwhile Sinead insists that Daniel should now take his opportunity at Oxford. ​​​​​​ 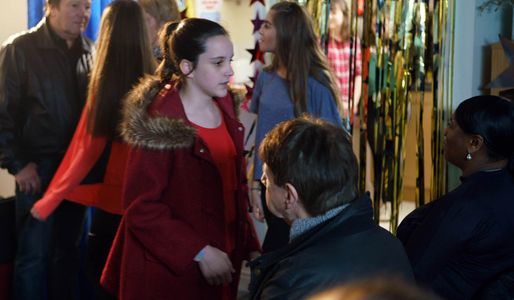