Dressed up to the nines, Bethany instructs Lloyd to drop her at the Dog & Gun. Trying to appear casual she joins Callum and Gemma in the pub. Amused Callum buys her drinks. Desperate to impress, Bethany offers to help Callum with his next delivery and he chucks her a small package of drugs. But when the police raid the Dog & Gun, will Bethany be arrested? Sarah’s horrified when Lloyd tells her he dropped Bethany at the Dog & Gun and sets off in search of her.

As Sally and Tim discuss their wedding, Kevin calls round and tells Tim there’s a car showroom in town looking for a new window cleaner and he’s put in a good word for him. Sally’s thrilled and Tim tries to appear enthusiastic. Will Tim make a good impression?

Gary calls in the factory with a picnic hamper, hoping to surprise Alya. But will he get the response he was hoping for?

Anna tells Faye she’s having Miley for the afternoon and suggests they all go to the park together. How will Faye react? Roy plucks up the courage and phones Cathy.

Admitting she fancies him, Bethany tries to kiss Callum, but spotting Sarah approaching, Callum quickly backs away. Bethany’s mortified. Sarah drags Bethany home, where she tears a strip off her for drinking with Callum. Sarah meets Callum, telling him she reckons Bethany’s got a crush on him. Callum laughs it off dismissively but when Bethany later clocks Callum and Sarah kissing across the street her eyes narrow with envy. Bitter, Bethany tells Sarah to watch out as Callum is always eyeing up other women. Meeting Callum, Bethany assures him she won’t say a word about the drugs raid so long as he’s nice to her. Callum wonders if he’s met his match.

Having spent the afternoon with Anna and Miley, Tim heads to the pub where Sally finds him. Thoroughly annoyed with Tim for missing his appointment at the garage, she drags him home where she rows with Tim over his lack of ambition. But how will Sally react when Tim admits he’s fed up of being compared to Kevin?

Cathy calls at the café and Roy’s pleased to see her. Tyrone suggests Cathy joins in their next curry night and Cathy accepts.

Alya apologises to Gary and they share what’s left of the picnic in the café. 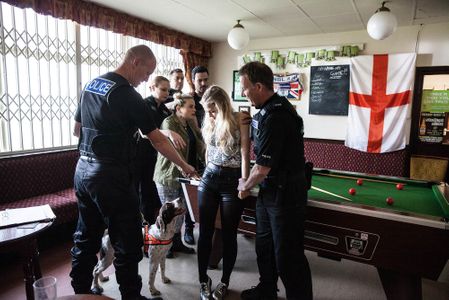 Coronation Street 09/07 - Bethany gets in over her head