With Tyrone unable to work for 6 weeks he and Fiz worry about how they’ll manage financially. Vising him in hospital a devastated Jason blames himself for the disaster and promises to help Tyrone out by claiming on his insurance. Will Todd be forced to tell Jason the truth about the accident or will Tony force him to keep schtum?

Steve visits Peter in prison, under pressure Peter admits that Jim put him up to it as he really wants to see Steve and Liz to put things right. Steve leaves in emotional turmoil. How will Liz react to the news?

Luke and Katy arrange a date in the Rovers. Will they finally give in to their feelings and how will Steph react to the news that her best friend is dating her brother?
​
Eksewhere, Rita looks to the future. Mary persuades Julie to join her at the gym. 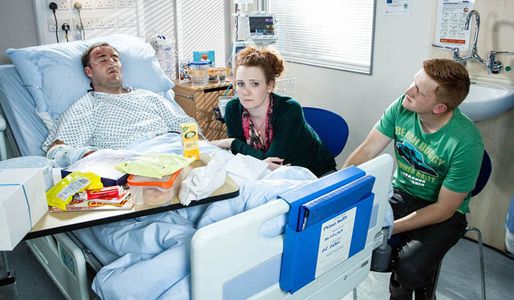