Coronation Street 27/11 - The pressure gets to Tyrone

When No.9’s TV subscription gets cancelled, Tyrone panics and assures Fiz he paid it. Convincing her there’s been a mix-up, Tyrone phones the TV provider and pays on another credit card. Meanwhile a mate of Tyrone’s delivers an inflatable Santa. Tyrone’s perturbed when Baz says he’ll need paying for it. Tyrone leaves Roy in charge of putting Santa on the roof while they take Hope to hospital. But when they arrive home they find Santa totally deflated on the roof. Tyrone’s furious that Hope’s big surprise has been spoiled and confronts Roy. Roy’s astonished by the onslaught.

Steph’s upset by messages from friends who have seen her naked photos and distraught when look reveals their parents know. When some rowdy blokes in the Bistro snigger over their phones, paranoid Steph assumes they are looking at the photos of her and angrily confronts them. Realising she’s got the wrong end of the stick, Steph flees mortified. Luke and Andy agree that Jamie needs punishing for what he’s put Steph through.

Mary and Brendan hold court in the Rovers. Mary roars with laughter at Brendan’s boring stories while Eva, Norris, Rita and Emily are nonplussed.

Chesney’s annoyed at Sinead’s reluctance to take up Linda’s offer of a free trip to Portugal to see Joseph. How will Simon’s first counselling session go? Zeedan’s impressed with Gary’s plans for the gym and offers him tips to win round Sharif. Gary’s surprised. Meanwhile Gary’s suspicious when he spots a muscly punter passing a bottle of pills to somebody in the gym.

Having accidentally unplugged Santa, Sinead restores the power and Hope’s delighted. A calmer Tyrone apologises to Roy for overreacting. Roy senses a deeper problem but Tyrone insists there’s nothing else. Fiz tells Tyrone that once Hope’s chemo is over, they can look forward to Christmas, thanks to him. A guilty Tyrone bottles out of mentioning his debts. Roy calls at No.9 and offers Tyrone money, guessing he may be struggling financially. Will Tyrone open up to Roy and accept his help?

When a devastated Steph confides in Leanne how her naked image is all over the Internet, Leanne makes her see Jamie’s the one in the wrong. Luke and Andy track down Jamie to his local. Pinning him to the floor, Andy reveals to Jamie’s girlfriend what he did to Steph. How will she respond? Steph then turns up with Leanne and the police in tow. Will Jamie be arrested?

Brendan invites Mary to an Inexplicable convention. Mary’s thrilled until he casually mentions that his wife refuses to go. Mary scurries into the toilets, crushed. Brendan’s oblivious to Mary’s upset as she puts on a brave face in front of him. But Mary remains utterly confused by the revelation that he’s married.

Gary tackles the muscly bloke in the gym and finds he’s dealing steroids. Gary throws him out as Zeedan and Sharif watch in admiration. Will it be enough to convince Sharif to give him a chance at managing the gym? Sinead admits to Fiz that she doesn’t want to go to Portugal because Katy makes her feel uncomfortable. Can Fiz convince her to go for Chesney’s sake? Leanne confides to Eva and Robert that Simon refused to speak throughout the counselling session. 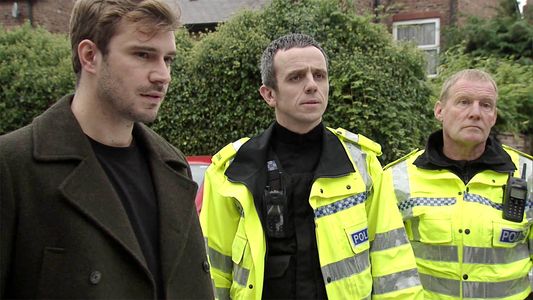