Coronation Street 28/07 - Robert And Michelle Realise They're Being Targeted

Toyah tells Leanne that she’s got an appointment with her IVF consultant. Gail summons Leanne toNo.8 and begrudgingly hands her a cheque from Nick for £25k as a gift from the sale of the flat.Leanne’s stunned, and showing her cheque to Peter, insists she wants to fund their IVF.
​

Michelle scrubs the graffiti off the wall while Phelan fits new locks to the bistro door. Robert returns home and apologises to Michelle explaining how he hit the casino, got drunk, was mugged in town and then spent the night in a police cell. As Robert andMichelle approach the bistro, they’re horrified to see a youth hurling a Molotov cocktail at the door.As the door is engulfed in flames, Robert chases after the youth leaving Michelle frightened.
​

Tracy arrives with Amy in tow. Pointing out that they’re the same age, Tracy suggests Summer and Amy should hang out together. Before they can object, Tracy swans out. Summer’s unimpressed.
​

Gina opens her post to discover a stack of unpaid bills. Oblivious to Gina’s financial worries, Sophie reminds her about the money she owes her. When Gina’s awarded a bonus at work for being the most productive factory girl, Sophie congratulates her whilst Gina shifts uncomfortably.Moira reprimands Liz for gossiping with Dr Gaddas when she should be working. Liz offers Moira some advice but Moira’s quick to put her down telling her to stick to answering the phone. Liz fumes.
​

Robert returns out of breath, angry that he lost sight of their assailant. Michelle wonders if the mugging and the vandalism to the bistro are linked. Robert and Michelle report it to the police and suggest that Rich is behind all the incidents.

​Steve calls in the Rovers and asks Peter if he’ll give Liz some shifts behind the bar as she hates her new job. Will Peter agree? Peter reluctantly agrees but when he suggests it to Liz she declines his offer, realising that it’s Steve’s idea. Sophie corners Gina and demands the money she owes her. Gina reluctantly hands over the cash. 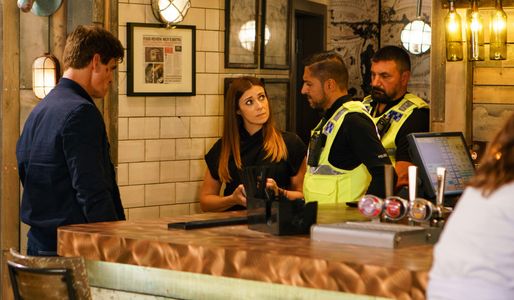