Rosie and Sophie are perturbed to overhear Kevin admit to Anna that his money troubles are so bad he may not meet the mortgage payment. Rosie informs Sophie she’s secured a glamour shoot with a fee that would significantly reduce Kevin’s debt. Sophie thinks it’s a bad idea.

Brian’s pleased to see Cathy as she arrives back from Scotland and presents him with a pair of socks to replace the ones she ruined. Mischievous Yasmeen manoeuvres Cathy into inviting Brian to the theatre with her. Brian’s only too happy to accept. Not wanting Roy to know of his date with Cathy, Brian pretends he’s going to a talk on carbon emissions.

Jenny recruits Sally for a local radio interview promoting the mastectomy bras. Meanwhile Johnny stuns Jenny by suggesting they get married in the summer and tells her to get organising. Jenny’s thrilled. Toyah, Leanne and Simon demand to know if Peter’s been drinking. He admits being tempted due to Chloe’s lies but swears he resisted. 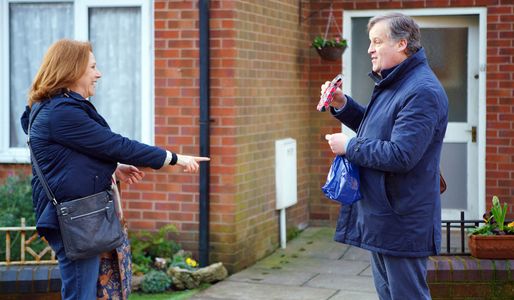