As Liz nervously prepares for her meeting with Jim, Peter begs for more alcohol, but Jim says he can have his reward once Liz and Steve have visited. So when Liz visits alone will Peter have his booze withheld? Jim tells Liz how much he misses his family but Liz points out he’s only himself to blame. As Jim tries to convince Liz that underneath she still loves him, will Liz soften?

Jason frets as he blames Tony and Todd for the fact that Tyrone is in hospital and they can’t claim on the insurance.

​Tracy runs through her diva-like wedding demands with Michelle.

Elsewhere, knowing that Steph would disapprove, Katy and Luke keep schtum about their kiss. Julie and Mary compete to impress Dev at the gym.

With Jim refusing to give Peter any more alcohol a desperate Peter tracks down Jim’s illegal stash and drinks the lot. When Jim finds him on the floor barely conscious will he alert the guards and get Peter to hospital or is Peter’s life in the balance? Meanwhile Liz tells Steve and Michelle that Jim hasn’t changed a bit and she’s told him they want nothing more to do with him.

Jason feels terrible as a pained Tyrone returns to the street but Tony is adamant they can’t involve the insurance company as if anyone found out they were using materials that didn’t meet building regulations then Jason’s business would be finished. Jason’s furious and tells Tony and Todd that once they’ve sorted out this mess they’re both sacked. Calling at No.11 Tony offers to make good the damage and give Tyrone £1k to tide him offer. Will Tyrone be appeased by his offer?

When Dev pays Julie a back handed compliment she tells him to shove his gym membership. Will he be able to win her back round?
​
Elsewhere, Katy calls at the garage to tell Luke they can only be friends. Luke reluctantly agrees but it’s clear they both want more, will they be able to resist each other? Steve makes some signings for his pub cricket team. 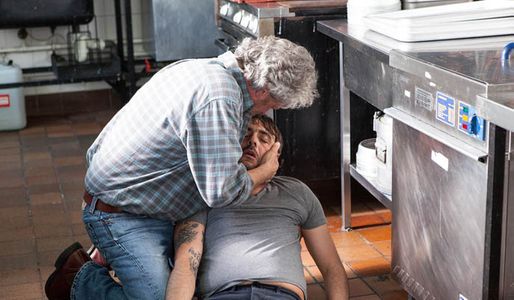