Carla assumes that Peter is worried about Simon, when actually he is sneakily daydreaming about Tina. The bride-to-be confesses to Michelle that she’s worried Peter might have changed his mind about their wedding, just as Peter confesses his feelings to Tina when she and Liz break up a fight between him and Rob.

Hayley finishes Carla’s wedding dress, and she loves it. Meanwhile Hayley is worried that Roy isn’t preparing properly for her death, so she cheerfully takes him to look at coffins with her. But will it all be too much for poor Roy?

Elsewhere Michelle is annoyed when a studious Steve arrives home late from his history lesson.

Liz walks in on a flustered Peter and Tina. They try to act casual, but Liz realises something is going on. Peter apologies for getting carried away with telling her how he feels, but they obviously both have a bit of a thing for each other. Will they be able to resist it?

Roy is getting pretty stressed out at Hayley, who realises she might be acting a bit too casually about her imminent death. She goes for a drink at Carla’s hen do and when she returns Roy apologises for being weird. But is he finally ready to talk about it?

Leanne wants to drop the video incident, leaving Anna feeling incredibly relieved. Faye admits she thinks the family will want to abandon her, which upsets Anna. 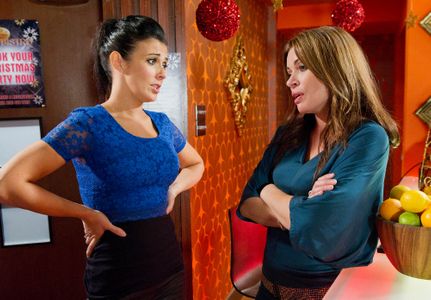