Kal apologises to Nick for how he treated him at the gym. Nick lets it go and insists Kal join him and Leanne for dinner. After an awkward meal Kal realises he doesn’t want to lose Leanne.

Maddie’s miserable when the social worker tells her that her brother Ben is moving to Devon. Sophie suggests they visit Ben’s foster parents, but is this a suggestion she’ll soon regret?

Tyrone tells FIz he is having drinks with a mate, so when she sees him going to the pub with Maria she is upset. Maria calls on her to tell her they are only friends, but is Maria lying to herself?
​
Elsewhere, Steve lies about the bruise on his face so Lloyd doesn’t find out he’s joined the gym. Sinead tells Fiz about the inappropriate dress Chesney bought her and fed up with Sally moaning about Maddie, Tim leaves the pub in a huff. 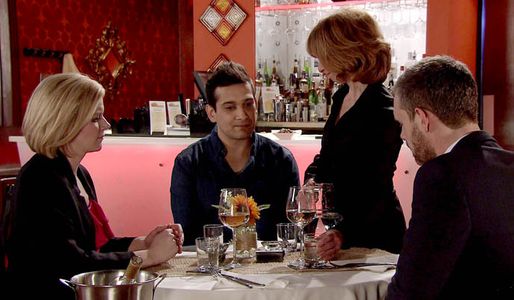