While Sally prepares for her radio interview, Rosie gets offered even more money for the glamour shoot. Sophie informs Kevin of how Rosie’s going back to glamour modelling to help him avoid bankruptcy. Furious, will Kevin be able to talk her out of it? Jenny and Sally are interviewed on Radio Weatherfield. Sally talks about her cancer experience as Tim and Rosie listen with pride. But back at home Sally takes a phone call from the hospital and listens in horror to the bombshell that her latest mammogram shows her cancer has returned.

Roy quizzes Brian on carbon emissions, leaving Brian flustered trying to keep on top of his lies. When Cathy asks Brian out again, will he agree?

Leanne counsels Toyah, who’s struggling to believe Peter’s claim that he’s stayed sober and faithful. Fiz gives stressed Alya a massage in Underworld. When Alya praises her magic fingers and Sean points out how much professionals charge, Fiz has a brainwave.

Sally tells Tim she’s got to go into hospital as her cancer’s come back. Tim’s floored as he hugs his wife. Rosie and Sophie burst into No.4 and play Sally and Tim a recording of Sally’s phone call from the hospital that’s been posted online. Sally’s sickened to realise she’s the victim of a vicious prank. Tim’s furious to discover the extent of the online abuse Sally’s been suffering and insists she deletes her accounts. Sally’s deeply disturbed.

Roy’s puzzled when Cathy mentions the play she saw with Brian last night. Roy tackles Brian about his deception and vows he has no objection to him and Cathy spending time together as friends. Brian informs Cathy that Roy’s given his blessing to their friendship, but were they both hoping for more?

Peter explains to Toyah how he saw her with Toby and thought he’d lost her. He swears he hasn’t drunk or cheated on her. Will Toyah believe him and the couple be reconciled? Aidan’s annoyed to find the factory girls helping Jenny with wedding dress ideas on company time. Johnny suggests she picks one person to design it, so Jenny selects Eva, knowing it will wind up Aidan. Fiz tells Tyrone she’s going to take a night school course in massage therapy.​​​​​ 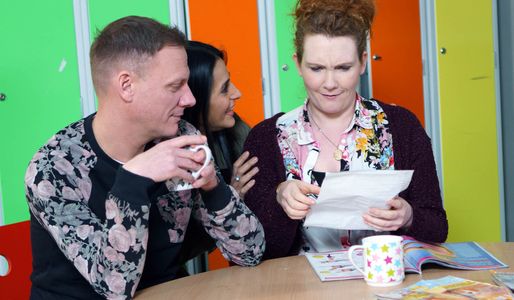