Having spoken to the police, Robert tells Michelle that Rich has a cast iron alibi and couldn’t be the vandal. Robert offers Chesney £5k as a goodwill gesture.To Adam’s annoyance, Chesney accepts, glad to put the whole thing to rest. Robert admits he’s going to struggle to pay Chesney. Michelle offers to help him out but Robert won’t hear of it. Whilst nobody’s looking, Robert grabs some cash out of the bistro till and heads off to the casino. In desperation, Robert gambles away his cash, hoping he’ll drop lucky.

When Leanne explains that it’s not working out at theRovers, Eva insists she can move in with she and Aidan. But when Steve suggests to Leanne that she and Oliver move in with him so they can share child minding duties, will Leanne agree to give it a go?

Erica starts work at the bistro. She’s mortified when Dev and Mary park themselves at a table explaining that they’re there to offer her moral support.

Billy worries that Summer is bottling up her grief. When Michelle spots Will on the new dating app Maria is using she encourages Maria to get in touch with him. Adam warns Eva not to sign her new office job contract until he’s checked it over. Craig admits to Sophie and Chesney that he may be fired from the police force because of the way he obtained the evidence against Neil.

As the croupier calls final bets, Robert places his last chips on red. Telling Robert how disappointed she is, Michelle leaves him to it. Will Robert’s gamble pay off? Back on the street, Robert’s horrified to see that Michelle’s car has been vandalised. After persuading Luke to fix it before Michelle sees it, Robert returns home and apologises to Michelle for his behaviour. As Michelle snuggles up to Robert, relieved there have been no more attacks, Robert hides his unease.

Steve and Leanne are clearly enjoying being the doting parents. Steve and Leanne practise the controlled crying technique with Oliver in the hope he’ll learn to sleep through.

Clearly fed up with Dev, Erica flirts with Zeedan and tells Liz she can share her room at No.7 and Dev can have the sofa. But when Dev confides in Erica that he’s had an offer for the gym but if he accepts it, it’ll scupper Kevin’s sale of the garage, Erica encourages him to go for it.

Maria arranges a date with Will and they meet in the Rovers. Aidan watches jealously.When Bethany finds out that Craig’s at the police station being given his marching orders, she feels terrible. Having revealed that he’s dumped his girlfriend, Luke offers to cook dinner for Alya. Alya’s quietly thrilled but as they sit down to eat they’re interrupted by Robert who begs Luke to fix Michelle’s car window. Alya’s disappointed. As Summer cries for her dad, Todd and Billy wish they could fix things for her. 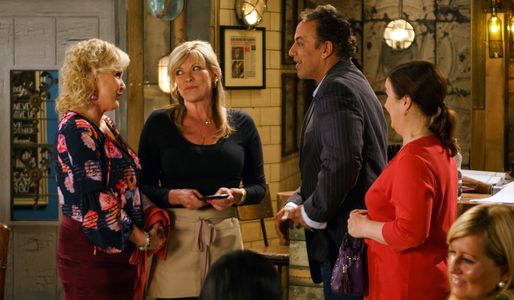