Aidan drags Carla into work despite it being a bank holiday and insists they go through the accounts together. As they later head to Maddie’s Memorial Auction in the bistro. Carla’s weighed down by guilt and getting drunk she bids £250 for a photo of Lorraine Kelly, as Aidan goes up against Robert for a signed County football shirt. Under sufferance, Tracy attends the auction. She’s unimpressed to see Carla there whose presence only adds to her guilt. As a drunken Carla crashes into a table sending the drinks flying, Tracy begs Carla to stop torturing herself and go home leaving Robert bemused. As Nick and Aidan carry Carla out of the bistro, Robert confronts Tracy, demanding to know why she was so upset by Carla.

Tyrone and Fiz set off for the hospital with Hope and Ruby. After more tests, the nurse assures them that they’ll have Hope’s results within a couple of days. Fiz admits to Maria that she’s worried sick about Hope.

Andrea persuades Eileen to let her stay at No.11 for a few nights. Lloyd tells Liz that Andrea knows they spent the night together. Unsure where she stands, Liz suggests dinner. Will Lloyd agree or is his heart with Andrea?

Sally arrives back from town with a wedding dress, explaining to Gail how she didn’t intend to buy it but couldn’t resist. However when she tries the dress on at home the zip jams and Kevin goes in search of Sally, concerned that she’s missing the auction. Sally’s mortified as Kevin finds her stuck in her wedding dress.

Tracy squirms as Robert quizzes her as to why she’s so affected by Carla’s guilt over the fire. Robert puts Tracy on the spot and demands to know if she had anything to do with the fire. Will Tracy finally admit what happened that night? Meanwhile bent on self-destruction drunken Carla bangs on the door of No.1 shouting for Amy, begging for forgiveness and assuring her she never meant to hurt her. Robert urges Tracy to tell Carla the truth but Tracy screams at them all to leave her alone. As Michelle and Nick guide Carla home, united in their concern for her, Robert turns to Tracy, telling her that if she can’t be truthful with him then they have no future. Will Tracy confess her sins?

Can Tyrone offer Fiz the support she needs as she awaits Hope’s test results?

Over dinner in the bistro, Liz and Lloyd agree that neither of them is looking for commitment and that a casual relationship is the way forward.

Sophie’s shocked to find Sally in a wedding dress and Kevin trying to help her out of it. In a last ditch attempt to help Sally out of her dress, Kevin rips the zip off it. Sally’s devastated and when Tim later finds the zip, Sally’s gutted, citing it as bad luck. Can Tim reassure her? Meanwhile Tim suggests they throw a surprise party for Kevin’s 50th birthday. 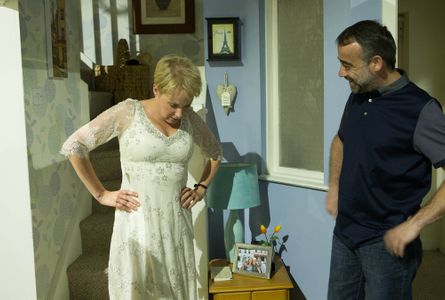 Coronation Street 28/08 - Tony finally gets his hands on Callum