Having found out Simon’s been in a fight at school, Leanne marches him home. Simon blames Leanne, telling her the lads were picking on him because she won’t buy him a decent phone. Leanne runs a bath and orders Simon to wash the dishes but Simon refuses and giving her an almighty shove, does a runner from the flat. Leanne stumbles and catching her head on a table, passes out on the floor. As water starts to seep through the kebab shop ceiling, Dev and Mary head upstairs and let themselves into Leanne’s flat. They’re horrified to find her unconscious on the floor and the bath overflowing.

Fiz breaks the news to Chesney, Sinead, Beth and Kirk that Hope has cancer. Unaware of the conversation, Sally’s arrives at work and announces she’s set a wedding date. Beth’s dismissive and Sally’s offended. But when Aidan confronts Fiz in the street, demanding to know why she’s been absent from work, Sally’s horrified to hear that Hope’s seriously ill.

Carla promises she’ll pay Nick back for the gambling debts she’s run up on his card. Nick insists the money is unimportant but she has to seek professional help. Will Carla listen? Having spoken to Nick, Michelle forces her way into Carla’s flat and handing her the contact details for Steve’s therapist, insists she gets some help or their friendship is over.

Having agreed to set a date, Sally winds Tim up, making out she wants a big posh wedding which will cost a fortune. But her joke backfires when Tim suggests they postpone the wedding for a couple of years so he can save up!

Seeing Leanne being lifted into an ambulance, Zeedan’s shocked and insists he’ll go with her to the hospital. Simon watches, terrified, realising he’s the cause of her injuries. In the hospital, the nurse examines Leanne’s head injury and notices the bruises on her arms. Leanne plays it down but the nurse is suspicious and hands Leanne some leaflets on domestic abuse. Deeply upset, Leanne confides in Zeedan that Simon is the cause of all her injuries. Zeedan’s shocked but Leanne makes him promise not to breathe a word, blaming Simon’s behaviour on his troubled upbringing. But what will Simon’s next move be?

Aidan apologises to Fiz and assures her that her job is safe. Fiz and Tyrone tentatively explain to Hope that she’s got a lump in her tummy which needs to be treated.

Michelle implores Carla to get her life back on track and start by making an appointment with the therapist. Seeing Michelle out, Carla assures her she’s going to pull herself together. But has Carla really taken heed of Michelle’s advice?

Kevin takes on another big contract at the garage. 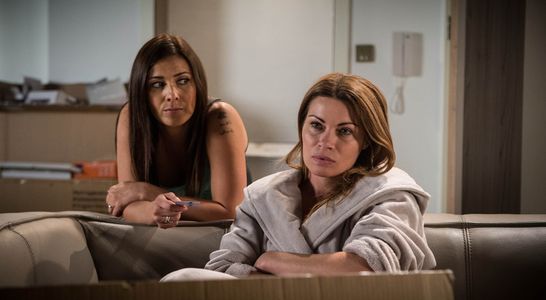 Coronation Street 21/7 - Leanne has something to tell Simon