Coronation Street 5/10 - Sally clings on to her wedding dreams

As Sally makes last minute preparations for her wedding, Sophie’s amazed to realise that Tim hasn’t backed down and Sally’s just banking on him turning up. Sophie tells Kevin she fears Sally’s having a breakdown, refusing to accept the wedding is off. Bumping into Tim, Sally begs him to change his mind and marry her. Tim warns her that she will be a laughing stock if she turns up for the wedding. Will Rita be able to convince Sally that she’s on a hide into nothing with Tim and needs to admit defeat?

As Carla works on a tough client, she’s unimpressed by a distracted Aidan, who’s studiously ignores calls from his dad. She’s later stunned when Aidan’s dad Johnny and sister Kate burst into the factory demanding to see Aidan. Carla’s further shocked when it becomes clear that Aidan hasn’t been entirely truthful about where he got the funds to buy into the business.

Tyrone heads to work at the crack of dawn, leaving Fiz
a note. Tyrone’s exhausted as they later take Hope to hospital for a scan.

Yasmeen investigates private prosecutions. Sharif urges her to forget Tracy and
focus on helping Alya and Zeedan move on.

In the Bistro, staff and guests alike are embarrassed for Sally as she stands in her wedding dress waiting for Tim. Sally’s resolve starts to crumble when it becomes clear that Tim’s not coming and as her guests dessert her she’s left stood alone like Miss Havisham!

Carla’s incredulous when Johnny reveals where Aidan really got his cash from and rages at Aidan for lying to her. Aidan vows to make a success of his Underworld investment regardless of where the money came from, pointing out that Carla wouldn’t have a business if it wasn’t for him. But what will Johnny have to say about this? Meanwhile Michelle chats to Kate (third cousin) about her upcoming wedding to soldier Caz.

Tyrone’s exhaustion leads to a mistake at work. As he tries to pick up the pieces, Fiz struggles with the girls at home.

Craig is stunned when Caitlin turns up on the street but does she have a good reason for missing their date? Will Yasmeen be able to prioritise her family over getting revenge on Tracy? 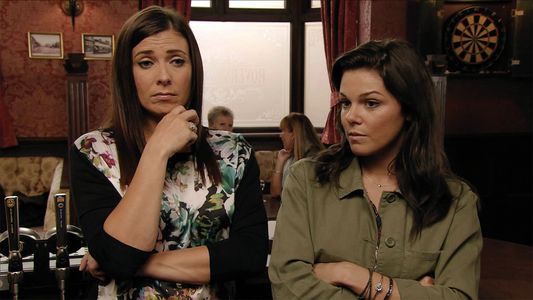