Coronation Street 9/08 - Tracy's lies finally catch up with her

Tracy’s on pins, wondering if Carla has gone to the police. She tells Robert how Carla was about to commit suicide until she stopped her by admitting that she caused the fire. Robert’s shocked. Meanwhile Nick and Michelle listen with horror as Carla tells them about Tracy’s confession. Nick insists Carla should go to the police but Carla’s reluctant, pointing out it’s just her word against Tracy’s. In the Rovers Tracy nervously eyes Carla. When Alya arrives, announcing to Carla that she’s landed a job with Macnee’s and Underworld can wave goodbye to any more orders from them, she realises this is revenge for Kal’s death. On the edge, will Carla reveal that Tracy started the fire and it was actually Tracy who killed Kal and Maddie? And how will Tracy react when the police arrive and arrest her on suspicion of murder?

With the Hodges due back from Canada, Anna’s looking forward to seeing Miley. But when Tim calls round and finds their house is empty and up for let, Anna phones Josie, keen to know what’s going on.

Roy drops Fiz, Tyrone and Hope at the hospital for Hope’s biopsy test.

Zeedan talks to Simon about his relationship with his own Mum and how he now regrets some of the awful things he did. Leanne’s touched. Eileen, Tony and Todd collect Jason from hospital. Still in a lot of pain, Jason leans on Todd, their rift clearly healing. 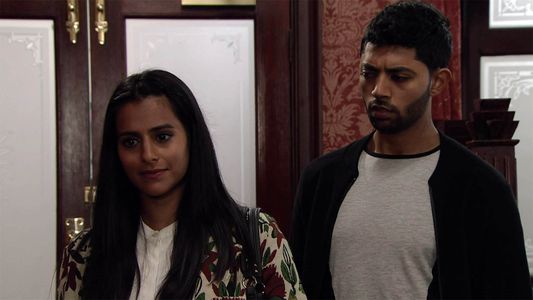