After a run in with Leanne, Nick’s on edge and takes his frustration out on Steph in the bistro. Fed up, Steph warns him that if he continues he’ll have to find a new waitress. Rocked, Nick admits to Audrey that he’s at his wits end with the pressure of the divorce.

When he then sees Leanne, Kal, David and Alya all laughing together in the cafe he suddenly clutches his head and cries out in pain. Is Nick having a seizure?

Still feeling guilty about running over Gail’s foot, Michael offers to be her servant for the day. Gail’s touched but when Michael tells her how much she means to him will Gail respond?
​
Disconcerted by Kirk’s strange behaviour, Beth worries that he’s going off her. Deciding it’s time to take action, Beth tells a bemused Kirk she’s taking him out for dinner.
​
Elsewhere Deirdre’s less than impressed when Ken’s reveals he’s booked them a camping holiday.

As everyone gathers round Nick, Roy wants to call an ambulance, but making out he’s a had a few similar attacks and they’re brought on by stress, Nick leaves. Leanne and Kal feel terrible but when Nick reveals to David that he faked his seizure to make them feel guilty David’s appalled. When Leanne then offers to put the divorce on hold if the stress is causing his seizures will Nick come clean about his dirty tricks?

When Gail announces that she and Michael are now an item, will the family give her their blessing?

In the kebab shop Kirk furtively hides the engagement ring in Beth’s keba. But when she chucks her kebab in the bin claiming she needs to lose weight Kirk panics. Desperately trying to retrieve the ring, will he finally pop the question?
​
Will Ken be able to convince a reluctant Deirdre to set off on their caravan holiday? 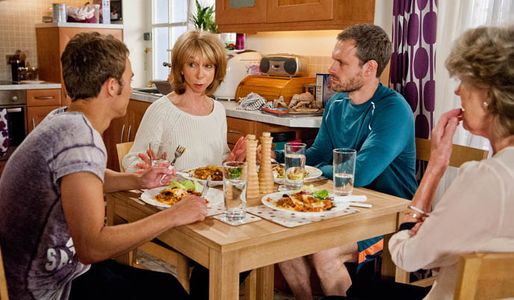