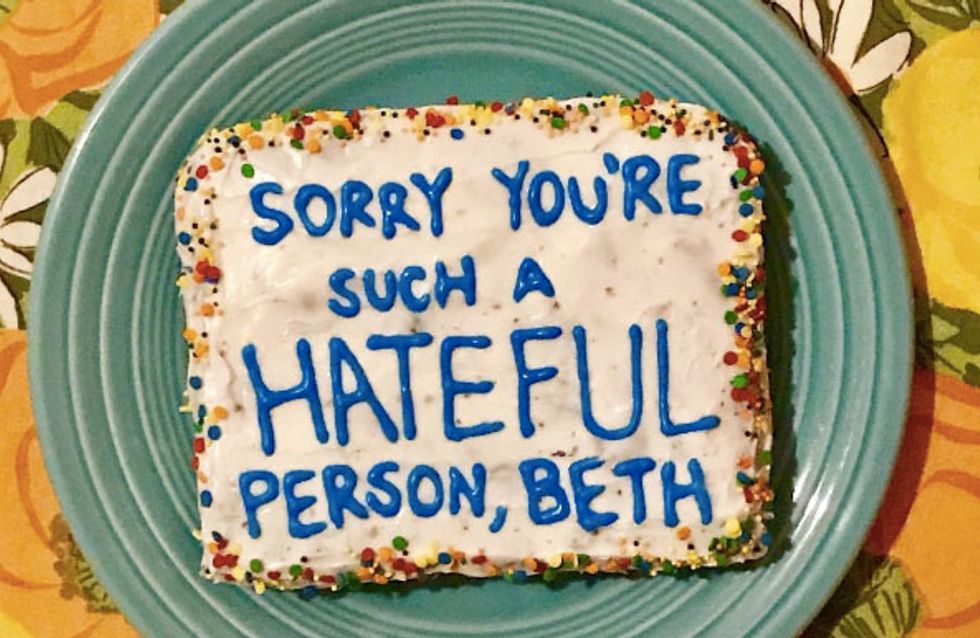 Everyone's had some dumbass say means things to them at one point or another. Maybe it was over an old school AOL chat or MSN messenger, or maybe it was on Facebook or Twitter. No matter the medium, it's just a fact of life that sometimes, people suck. Well, now you can get sweet sweet revenge on these people, with a troll cake.

The premise of the troll cake is this: You find the mean message that's made you hella mad, then you send it to Troll Cakes, the company that have taken it upon themselves to turn rude comments into delicious, icing-heavy cakes.

The company then sends the cake to the haters and it forces them to, you know, eat their words. Revenge never tasted so sweet - literally.

Trolls weigh in on Lena Dunham's new haircut. Part one in a series of seven. #trollcakes

Troll cakes are based in New York and call themselves a bakery/detective agency - because even if you can't find the address of the hater yourself, they'll track them down and cake 'em for you.

"When you open it up, [the box] looks like 100 percent good news," Kat Thek, founder of Troll Cakes, told NPR News. "And then you see a screen grab of your comment, and it says, 'Congratulations! Your internet comment has been made into a Troll Cake.'"

The hulk has been trolling. #hulksmash #trollcakes

Unfortunately, Troll Cakes only resides in the US right now, but hey - as we've learnt, there's plenty of trolls in America that deserve a troll cake.

It costs $35 to make and ship the cake if you know the address of the person, which can be delivered in person if you live in New York City. Or, if you're not sure of the address, it's an extra $25 for Troll Cakes to track them down for you. And, as a nice little addition, for $30 you can order the 'Tiny Hands Special', which allows you to send a Trump tweet of your choice to the White House. As Trolls Cakes say, it's "bigly satisfying".

Will you be ordering a troll cake? Let us know! @sofeminineUK

Gin Fans Rejoice: You Can Now Get G&Ts Delivered Right To Your Door!

Sign up to get involved!
You might also like
Retro foods - how many can you remember?
by Charlotte Hoddge
Delicious ideas for a romantic Valentine's dinner
by Charlotte Hoddge
Delicious ideas for Pancake Day
by Charlotte Hoddge
Get Your Caffeine Fix! All The Coolest Coffee Shops In London
by Lareese Craig
London's Most Instagrammable Bars
by Helen Turnbull
There's A Nutella Cafe In Australia And We Need To Go There
by Lareese Craig
Baking essentials
by the editorial team
Sweet pastry
by the editorial team
These Penis Cakes Are Taking America By Storm
by Pascale Day
These Geode Gem Stone Cakes Are Literally Too Pretty To Eat
by Rose Adams