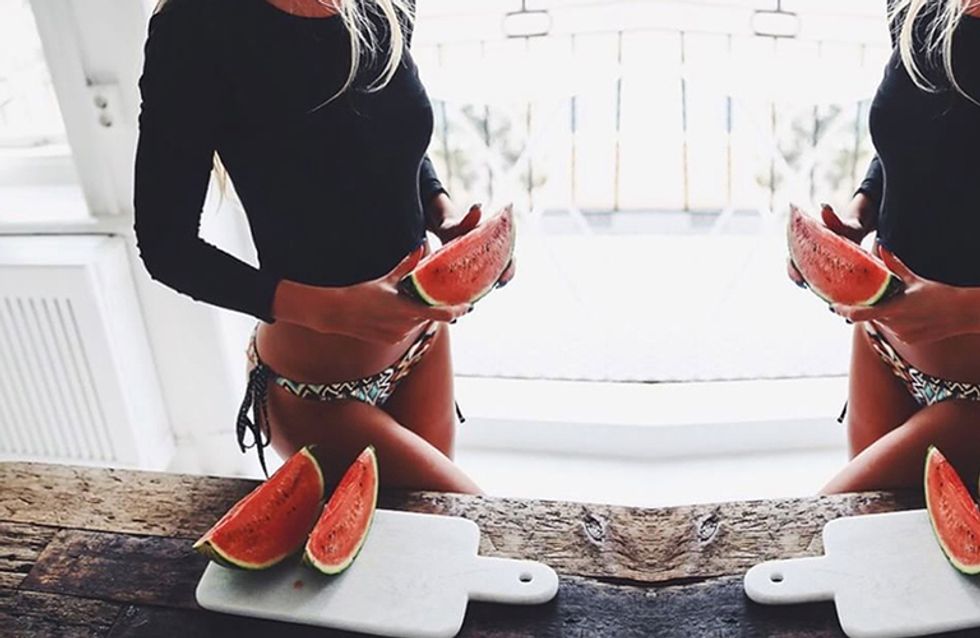 Diets sure are tough. They make you moody and hungry (and even a combo of both known as angry) and that's no fun for anyone. But there could be a solution to this dieting dilemma, and it’s known as the blood type diet. Sounds sinister, we know. It’s hard not to feel as though this may be some kind of strange cult ritual but trust us when we say you’re not going to have to take up any vampiric activities for this weight loss programme.

It’s hard not to feel as though the blood type diet may be some kind of cult ritual, but Dr Peter D’Adamo, the inventor diet, argues that the simple explanation for why some people lose weight quicker and easier than others is down to which blood group you’re in - and it’s not just him.

Karen Veto, author of The Blood Type Diet CookBook, says: “The work of nutritionist Dr Peter D'Adamo has shown that certain lectins (proteins contained in foods) are broken down by our bodies in different ways according to blood type. For example, people who have O type blood digest red meat well, but people who have A type blood struggle with it.”

Now, here comes the supposed science-y bit. The official website of Dr D’Adamo and the Blood Group Diet says that blood ‘antigens’ are not just in your blood but all over your body, including your digestive tract. Because these antigens are everywhere, they influence how your body reacts to the food you eat, for example: “the lectins in certain foods bind to your blood type antigen and cause your blood to agglutinate (stick together), resulting in feelings of fatigue, headaches [and] digestive issues”. In other words, how something reacts with you when you eat it depends on your blood type.​

But is there any truth in its claims? Opinions are divided.

Nutritionist Juliette Kellow tells us there’s “no scientific evidence to support it”, while Karen says many of her patients have achieved “dazzling results in very little time”.Could it work for you? If you’re curious and fancy giving it a go, Karen put together a delicious diet plan to accommodate your blood type.

Could it work for you? If you’re curious and fancy giving it a go, Karen helped has put together a delicious diet plan to accommodate your blood type.

​You belong to the most common blood group along with 44% of the UK population. Your metabolism is quite slow, which unfortunately means you’ll pretty much see the result of eating lots of food with almost immediate effect. Sigh. However, when it comes to exercising, you’ll be great at endurance sports such as swimming or long-distance walking, as your pesky metabolism breaks food down really, really slowly.

Red meat is perf for you, so try to eat it everyday. Along with this, eat plenty of poultry and cold water fish such as mackerel - they contain a shedload of omega 3. Eat dairy produce made from ewe’s or goat’s milk as your body is more likely to store the fat from cheese, milk and yoghurt made from cows milk. As for eggs, make sure you stick to hen and duck eggs, and consume no more than six a week. Wheat and dairy are a no go for you, compadre, as nutritionist Elouise Bauskis from www.NutriCentre.com says that O’s are prone to constipation and IBS (don’t worry, your secret’s safe with us), which the elimination of wheat and dairy will improve.

​You have the second most common blood type in the UK at 42%. It is thought that blood group A is most susceptible to stress, which will impact on your eating habits and, subsequently, your weight. From comfort eating to losing your appetite, stress will stop your body from breaking down food properly. Elouise also notes that it is likely that you'll have low stomach acid, which means you have a tendency to suffer from digestive issues traced back to "poor digestive fire". If you want to destress, combine your eating regime with a spot of relaxing exercise, such as yoga or Pilates.
​
Your perfect diet

​Bad news for meat lovers: it doesn’t bode well with your blood type, so you should seriously cut down on your meat intake. (Don’t shoot the messenger.) You should steer clear of rich meats such as lamb, mutton, duck, veal, pheasant and game - all the meats that, if you were a 16th century king, you would be upset about. However, you need your protein, so don’t cut it out completely. Elouise tells us that you can get your protein from white mean such as chicken and from oily fish such as salmon, but if you want to cut out meat altogether, you can get plant of protein from foods such as soya, nuts, pulses, and fruit and vegetables.

​Your blood group is pretty rare: you’re up there with 10% of the UK population. Similar to group blood group A, stress plays a big part in whether you gain or lose weight. Your metabolism is speedy and therefore can break down most foods pretty easily.

​Your fast metabolism means you can eat a lot of meat (don’t tell A), but it’s better to stick to rich and gamey meats such as lamb or pheasant. Unlike other blood groups, you tolerate lactose particularly well, which means that you don’t have to worry too much about your dairy intake - let the cheese binge commence!

Woah. You’re in only 4% of the population in the UK that belongs to group AB. You’re the group everyone wants to be in but only a few make the cut, like the Freemasons. You enjoy all the benefits of groups A and B, meaning that you can eat almost anything you want. Almost. Don’t go too crazy - you still need to listen to your body, because there will be certain diet restrictions, albeit small ones.

Eat plenty of easily digestible protein such as soya and protein, and limit your intake of fatty meats like duck and other gamey meats. You’ll also meaty, oily fish such as salmon, mackerel and tuna. To lose weight quicker you can cut wheat out of your diet and replace is with other cereals. Cheese can be a bit hit and miss, with riches cheeses such as brie and blue cheese being the ones to avoid. So at christmas maybe just stay away from the cheese plate altogether.

​Have you experienced the blood type diet? What did you think? Tweet us @sofeminineUK

The Lemon Diet: How To Drop A Dress Size In 7 Days​

Want More Energy? And Better Sleep? Everything You Need To Know About Vitamin B12

224 shares
Review full sized beauty products for us for FREE

Like us on Facebook!
You might also like
Positive Quotes To Get You Through Your Day
by Pascale Day
17 Celebs Who Have Spoken Out About Their Mental Health
by Pascale Day
Motivational Before & After Weight Loss Pictures
by the editorial team
Inspirational Tips To Get Your Weight loss Mission Started
by the editorial team
The Special K diet - weight loss wonder or waste of time?
by Maria Bell
Wanna Lose Weight Fast? Try The 8-hour Diet
by Vivian KELLY
Why Diet Pills Should Be Banned and The REAL Secret To Weight Loss
by Vivian KELLY
Everything You've Ever Wanted To Know About The Weight Watchers Diet
by Maria Bell
Vegan Diet: The Secret To Beyonce’s Dramatic Weight Loss
by Maria Bell
The Scarsdale Diet
by the editorial team