Nicola's relieved Jimmy doesn't want to see Juliette and Carl again. Later, In the café, Juliette arrives to thank Nicola for her help yesterday. Nicola lies that Jimmy has posted the signed papers and won't have anything more to do with Carl. Later, Nicola takes matters into her own hands when she posts Jimmy’s papers herself But when a chance meeting between Juliette and Jimmy allows him one last cuddle with Carl, it seems he may want to be involved after all…

Priya's nervous after spending the night with Rakesh. He's excited and asks her to stay longer but she is torn. Could this relationship still have a chance?

Jai struggles to comfort a distraught Megan as she plans Robbie’s wake. Meanwhile, at Home Farm, Charity begins to clear out all of Declan's belongings and is overwhelmed by her emotions. Megan arrives and whilst initially aggrieved by Charity’s actions the pair find themselves oddly united in their grief, Megan crumbles to think she has lost her whole family, both seemingly convinced Declan must be dead. Upset, they raise their glasses and toast to his memory.

Harriet tells Bob she's over her feelings for Ashley but she's disappointed when Ashley reveals Gabby will be spending the first night with them in their new home. Leyla listens sympathetically to Jai, who is relieved to hear nothing happened between her and Pete. The pair talk and she leans in for a kiss, how will Jai respond? 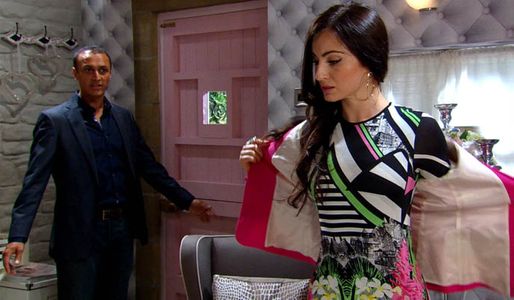