Alfie tries various methods to raise money but all of his attempts are unsuccessful. Alfie can’t bear to tell Kat the truth, so he lies and tells her he got a loan from bank. Whilst helping at Mick’s BBQ, Alfie overhears something which makes him think of a way out of his mess, but just how desperate is he?

Mick prepares for The Vic’s BBQ. Elsewhere, there is tension between Jay and Phil when Phil doesn’t prepare a reference for Jay’s imminent move to Bolton. Abi points out that Jay is overreacting and Phil will really miss him. On hearing that Summerhayes has visited the Beales with a new lead, Jay becomes desperate to leave for Bolton. After Jay is left touched by Phil’s reference and returns the sentiment with some football tickets, the atmosphere is ruined when Walford police arrive at the BBQ, but why are they there?

Back in Walford, Carol delivers the results of the DNA test to Charlie and Dot. 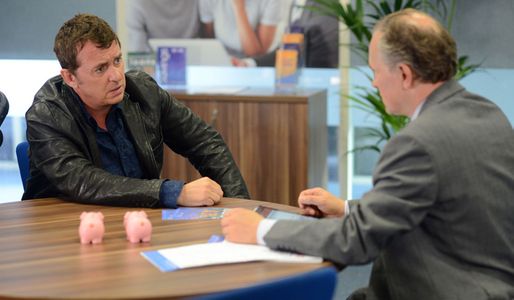