The police show up at Ian’s with urgent news. They inform him that Lucy’s mugging was staged and that it was murder, with all likelihood being that she knew the killer. Unfortunately the information is leaked and ends up all over the news, causing intrigue around the square. Ian takes matters into his own hands and begins interrogating the Walford residents, starting with David Wicks. David starts to suspect Max after his odd behaviour and asks him if he killed Lucy.
​
Feeling the pressure from her family and Tina, a flustered Sonia arranges an appointment with the gene doctor’s but her car breaks down and she ends up missing her appointment. Refusing to leave Sonia alone, Bianca’s grilling forces Sonia to finally blurt out that she kissed Tina.

Peter and Lauren are shocked when they see how many secrets Lucy has been hiding from them and they start to realise that they didn’t really know her at all.

Meanwhile, fed up with Cora treating his home like a hotel, Patrick gives Cora a month’s notice to find a new place to live. 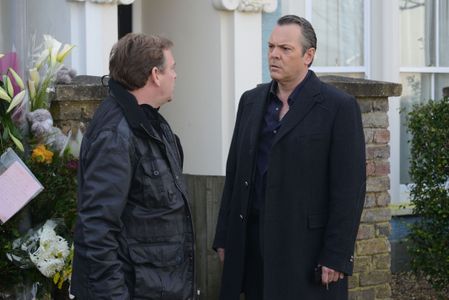