Linda and Fi come to a head over recent events and after Linda comes to an upsetting realisation,she finds herself confiding in Whitney about the situation. Linda is touched when Whitney assures her that she is the only person Mick loves, but as Linda later watches Mick and Whitney together,she makes a huge decision – is this the end of Mick and Linda?

With his plan falling apart, Steven turns to Max for help revealing Jane knows the tumour is a lie. Max’s mind turns elsewhere however when a tipsy Fi takes to the stage for her Walford in Bloom speech but as the protesters heckle, she shares some harsh words leaving Max to give her a reality check. Meanwhile, Jane pieces together the facts and comes to a startling realisation. With Steven confirming Max’s involvement in his lie, Jane confronts Max at the restaurant, she knows about his revenge plan…

Back in the Square, Walford in Bloom comes to an abrupt end when in fear for her safety, the Mayor flees. Disaster strikes when a gas explosion rips through The Square after a gas main explodes. C/H Honey throws a birthday party for Janet and Ricky but Billy is distracted when he confronts Phil about what he did to Jay. Ted and Joyce celebrate their anniversary. 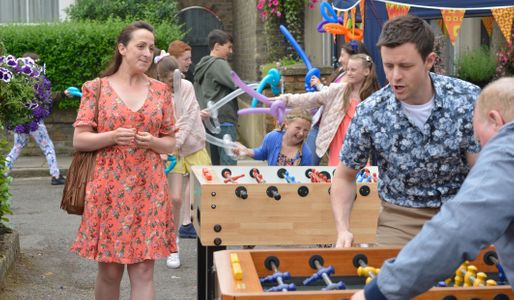