Mick prepares to face his demons as the day of the Swimming Gala arrives and despite his nerves and Shirley’s offer of a way out, he vows to stick to his word and not let his family down. Meanwhile, Dean is disgruntled when he learns that Mick is only doing one lap compared to his 19. As the time comes for Mick’s lap to start, he freezes – can Mick face his fears?

Elsewhere, Ian is feeling the pressure of Rainie’s blackmail and tells a disappointed Peter he won’t meet with the police to discuss the appeal. Ian pulls some cash together in an attempt to pay Rainie off once and for all and makes a quick exit from the swimming gala to meet her, however, his plan goes horribly wrong when Mick, driving home from the pool, spots Ian parked up talking to Rainie. Mick parks up behind him causing Ian to speed off, but the police soon pull round the corner…

At the Moons’ Kat and Alfie are suspicious of Jean’s reasons for being in Walford and grow concerned when she tells them that she has left Ollie. Later, when visiting Stacey Jean’s true intentions are made clear when she drops a bombshell and tells Stacey that she has found a way to get her out of prison.

Back at The Vic Stan turns on the charm offensive and arranges a belated birthday gathering for Cora. Cora, excited at some one on one time with Stan, seems disappointed when her granddaughters appear. 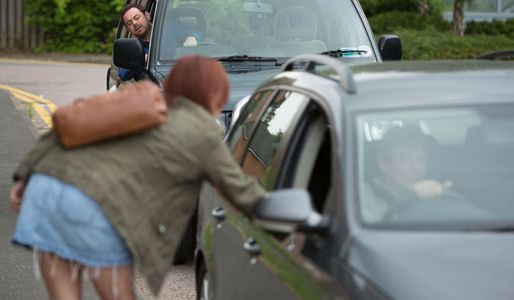