Eastenders 06/05 – Carol and David go to the registry office

David collects Carol from the hospital but once home Carol can’t stand being mollycoddled and gets David to take her to the registry office. Meanwhile, Sonia reveals to Tina that she hasn’t told Martin about the gene.

Lauren finds an email from a client who wanted to see her on the day Lucy was killed, and immediately worries that Lucy went to meet them. A determined Lauren heads to the police station to report her findings but is frustrated when they don’t take her evidence seriously. Later, Lauren decides to take matters into her own hands and arranges a meeting.

It’s Tina’s birthday! Shirley and Tosh agree to organise her birthday party together, but the two try to outdo each other and their bickering becomes too much for Tina, who flees her own party. After a heart to heart with Sonia, Tina returns to the party and announces she will be moving in with Tosh.

Dexter worries he’s blown his chances with Nancy and when he goes to try and sort things out Nancy mistakes him for an intruder and punches him.

Elsewhere, Cora continues to steal from the laundrette but is caught out by Dot, what will Dot do? Inspired by Lauren returning to work, Peter makes a deal with Aleks to get his stall back. 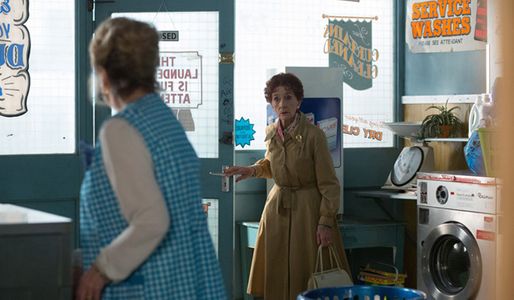 EastEnders 17/12 – Carol and David have a flirty meal together

Eastenders 30/06 - Carol continues to be anxious about her appointment