Elsewhere, after seeing Sharon with Marcus, Phil seeks out answers. Later, a furious Phil lets his frustration out at the Arches and Shirley tries to calm him down. Phil tells Shirley Sharon has been stealing from him and Shirley convinces Phil to cool down before he takes action. Feeling bad for him, Shirley offers to help and the pair end up passionately kissing and tearing each other’s clothes off.

Mick and Linda are back to their old selves. Later, Sharon and Linda embark on a drinking session and Sharon reveals she’s going to forgive Phil and Linda admits Dean tried to kiss her. Things take a turn for the worse when Sharon suggests that Linda is not completely innocent, causing the pair to argue until Mick tells Nancy to take Sharon home. While Nancy helps Sharon she reveals Linda’s secret, much to Nancy’s horror.
​
Elsewhere, Kat is furious with Alfie when he comes clean about the true extent of their money troubles. Alfie apologises and promises to be honest from now on but it doesn’t last long. Meanwhile, Stan challenges Babe on her suspicious behaviour. 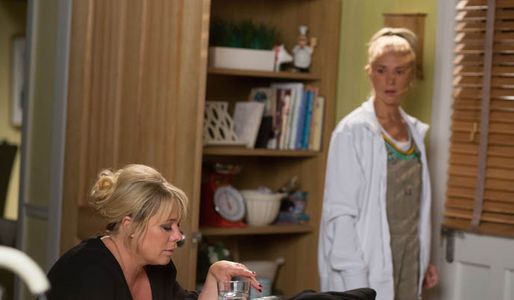