Ronnie pushes forward with her plan to win Dean over but her intentions falter when she learns Dean and Roxy are set to move out of London. After trying her luck with Mick and failing, Ronnie seemingly concedes to their plan and agrees to see if she can buy out Roxy’s share of the house. However as night falls, Ronnie gives Billy the keys to Blades and tells him they’re going to put Dean out of business for good to make sure Roxy can’t leave.
​
After a conversation with Carmel, Masood reveals the truth to Tamwar about why Zainab didn’t come to the wedding. Tamwar encourages Masood to stand his ground and tell Zainab that Kamil is staying with them but how will she react? Meanwhile, Carmel puts her own twist on Kush’s stall and when it’s a big success tells Denise she hasn’t felt so good in years. Denise teases her that it might be something to do with her recent one-night stand but Carmel denies all only to later find herself in an awkward conversation with Masood who invites her for a drink.

With Linda away for the wedding fair, Mick leaves Elaine in charge of The Vic and secretly makes plans for a delighted Shirley to meet Ollie. However after Elaine upsets both Whitney and Nancy, he is forced to cancel his plans leading Shirley to tell him she’s had enough of hiding their relationship. Kim is intrigued by various items arriving at Vincent’s new home but soon turns it into a competition. However Kim realises she’ll never win when it comes to Vincent’s wealth and agrees to let Vincent be a dad to Pearl once more. 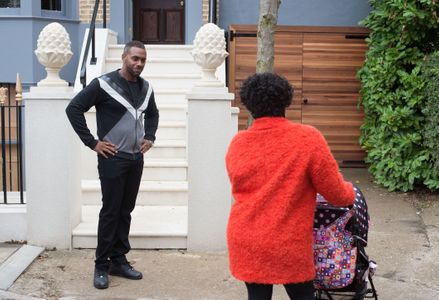