Eastenders 1/12 - A nervous Buster and Shirley prepare for court

With Jade’s hearing later today, a nervous Buster and Shirley prepare for court but soon end up in an argument with Mick who accidentally lets slip about Shabnam previously taking Jade without permission. Back at The Vic, Stacey is worried to hear that Mick has told a smug Shirley who plans to tell the judge.

Meanwhile, an optimistic Shabnam gets ready to leave for court with Kush but is stopped in her tracks when Stacey arrives and reveals Shirley knows what happened. With her world falling apart, Shabnam breaks down and goes to confront Shirley. Despite an emotional plea from both Shabnam and Stacey, Buster forces them to leave. As Kush and a broken Shabnam get ready to leave, the pair have an honest conversation and come to a decision. Later on, Shabnam and Stacey make amends but Shabnam drops a bombshell – she thinks she’s pregnant.

Elsewhere, Ian is left frustrated when he learns the council refuse to get a Christmas tree for the Square this year and comes up with a plan – Beale’s can sponsor the tree.

Claudette and Him continue to bicker. 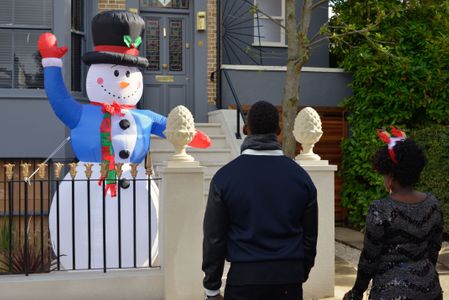 Eastenders 27/01 – Shirley is nervous to see her father