Eastenders 10/08 - Emotions are high at the Beales

Emotions are high at the Beales as Jane fears the worst as to why Carol was talking to the police. Despite Ian's pleas to carry on as normal, she heads over to the Butchers.

After learning Cora has been spotted at a local homelessness shelter, Jane offers to drive Carol and Abi to the location. However when they find her, they don’t get the reaction they were expecting and Cora attempts to run away. After an emotional plea from Jane, Cora eventually agrees to return to the Square but she refuses to open up to her family or accept that they care about her.

Meanwhile, Ian is fuming to learn Jane has gone to visit Carol and leaves Cindy to look after Bobby. With her world spiralling, Cindy heads out alone to get some fresh air and opens up to Liam about her worries. When she returns, she is horrified to see an upset Bobby about to put a brick through Max's car window. Without thinking, Cindy angrily grabs Bobby and drags him home where the pair have a huge argument and Cindy finds herself being pushed over…

At the Butchers, Jane continues to do her best to help Cora but she is interrupted by Liam who tells her about Bobby. Jane and Ian both return home to find an upset Cindy on the floor and Cindy finally cracks and shares some home truths about Bobby. As Ian defends his son, Jane tells Cindy and Ian that she's going to tell Carol the truth. As Jane marches over to the Butchers, Ian does his best to stop her but has no luck and they soon find themselves standing before a confused Carol –is Jane about to reveal their dark secret? 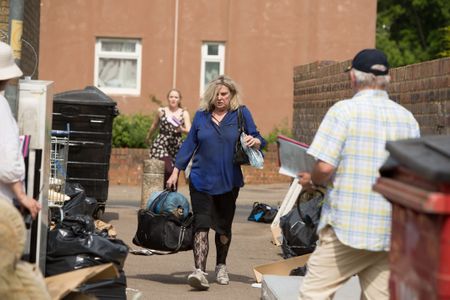