Bex asks Shakil for help with busking but as she impresses the crowd, Martin catches her in the act and forces her to return to work. Bex’s day grows even worse when Madison and Alexandra continue to bully her but things look up when Martin agrees to let Bex busk. Shakil later spots the girls taunting Bex and after he does his best to be supportive, Bex asks for his help again with busking. However outside, Martin runs into Shakil and warns him to stay away from Bex. At theFowler’s, Bex is disappointed to hear Shakil has cancelled on her

A positive Michelle tells Sharon she’s applied for a job her good mood soon goes when she has a run-in with Bex and Martin. Jay hears the commotion​. Sharon later finds a drunken Michelle in The Vic. As Sharon’s concerns for her best friend grow, she takes her home to try and talk to her butMichelle crosses the line causing Sharon to storm off.

Kush and Denise enjoy their time together but Kush’s mind soon turns elsewhere when he spots Carmel and Max together. 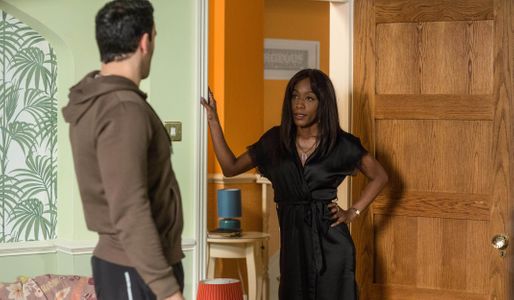 Pascale Day
…
Episode
From hair ideas to outifts, look no further for your daily inspiration