Eastenders 14/09 - The Foxes Anxiously Wait For News On Kush

As the Kazem is and Foxes anxiously wait for news on Kush, a guilty Denise fears their argument maybe to blame for what happened. Will Kush survive?

With Bernadette in pieces, Karen confides in Shirley who gives her an idea on how to help her daughter. Meanwhile, Bernadette arranges to meet Callum at the allotments but panics when Karen takes the family there to pay tribute to the baby. When Karen and Keegan spot Callum waiting forBernadette, they soon realise he is the father leading but how will they react?

As the family depart, Karen tells Keegan none of this is his fault and he breaks down. Back home, the family is reunited as Riley and Chatham return home. However it soon becomes too much for Karen who is comforted by Shirley.

Fi arranges a champagne reception to be put on at The Vic tomorrow to show Grafton Hill’s support for the community but Whitney grows suspicious of her intentions. Alone, Fi makes a suspicious call… Tom is put out when Michelle refuses to arrange plans with him. 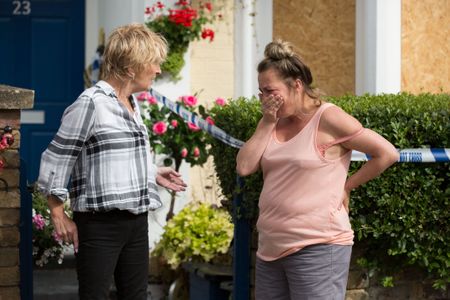