Lauren finds herself torn when Jane insists Max will be found innocent and pleads with her to keep their dark secret. After learning the details of the trial, Lauren confronts Abi and begs her not to give evidence against their dad. With the pressure building, Abi crumbles but will she listen to Lauren? Across the Square, Lauren finds a drunken Cora and wanting to buy some time so Cora misses court, Lauren suggests they have a drink in The Vic. The moment is interrupted however when Babe calls the police on Cora who should be at Court. As the police take Cora to court, she sees through Lauren’s plan and she insists Max is guilty. Lauren storms over to the Beale's and tells Jane she’s had enough and is going to tell the truth but she is stopped in her tracks when her waters break.

As Max’s trial kicks off, a nervous Lee is the first to give evidence but it doesn't take Marcus long to put doubt over his evidence. Back in the Square, Charlie is desperate to try and fix things with Ronnie but soon realises it’s a losing battle. Later, he spots Ronnie with Vincent and after confronting Vincent and realising the truth about their affair, he tells Ronnie he wants custody of Matthew. 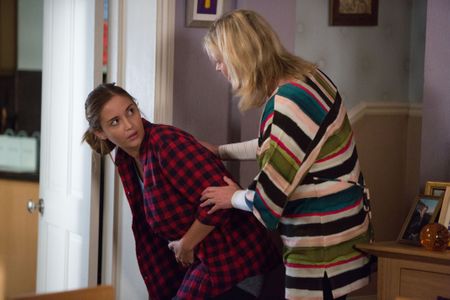