After her plan failed terribly last week, Kat decides to write Stacey a letter. Meanwhile, Alfie is still suspicious about what Kat has been up to and wants to get to the bottom of it. Max realises Kat is still looking for Stacey, and tries to convince her to leave it alone. Alfie confronts Kat about his suspicions and Kat begins to explain but they are interrupted when Stacey arrives!

The Beale household are happy when Jane returns, but Denise doesn’t seem too happy when she hears it was Ian’s bright idea to stay. Jane hears about the plan to close the market, but is stunned when he finds out Ian knows nothing about it.

Mick gets Aunt Babe in to help hold the fort at The Vic so he can take Linda out. Meanwhile, Linda is devastated to hear that Lady Di is pregnant after her glorious afternoon in the park with Tramp.

Shabnam makes it clear to Masood that he needs to get smart, but Masood doesn’t respond too well. Later, Masood talks about his suit to impress the ladies, causing Shabnam to burst into tears.

Elsewhere, the traders and stallholders on the market attend a secret council market meeting, to Alek’s surprise. 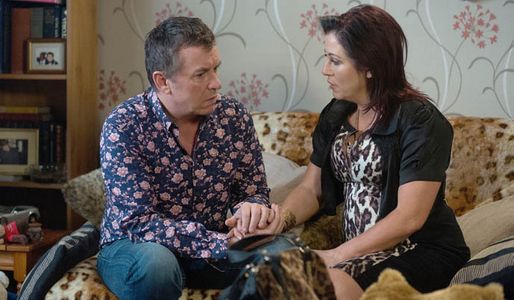