Johnny is desperate to come clean about hiding from Sharon’s attackers whilst Linda pressures him into keeping quiet and avoid a backlash. Later, with the pub speculating over Sharon’s attack and Johnny’s involvement Linda jumps to his defence and admits that he hid from her attackers, leaving Johnny humiliated.

An angry Phil is out for revenge. He struggles to hold it together and finds himself being consoled by Ian.

Les Coker hassles Ian for the payment for Lucy’s funeral. When he later finds Ian emptying the till at the café he assumes it’s to pay Les, which Ian readily confirms. When Les later comes to apologise to Peter for his earlier behaviour, Peter is left confused when Les mentions that he has still not been paid…
​
Later, Denise offers that she and Ian babysit Lexi so that Peter and Lola can spend some quality time together. Although feigning non-interest, Ian quickly bonds with Lexi, much to Denise’s delight. 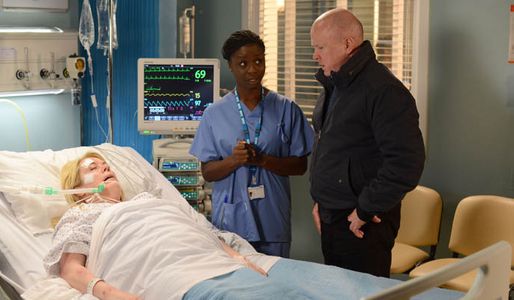