It’s the day of Lucy’s funeral and the residents rally around to show Ian and Peter their support. Ian arrives at Max’s and asks him to hand out the order of service at the church and to read over his eulogy, which a guilty Max agrees to. Christian and Bobby arrive, Ian is delighted to have Bobby by his side but gutted when he realises Jane won’t be attending.

Les arrives with Lucy’s hearse and a dumbstruck Ian arranges who is travelling in the family car, leaving a disgruntled Denise to get a taxi with Patrick and Libby, who has returned for the funeral. Ian is thrilled when Cindy arrives but his initial delight doesn’t last long as he tells Cindy she needs to change her outfit. Cindy refuses and reminds Ian about his false alibi…

At the church Peter falters and is unable to carry Lucy’s coffin so Lauren persuades Max to step in. Ian manages to compose himself but when he sees Max holding the coffin Ian loses his cool and lashes out at Max in front of the congregation, as he knows Max has been sleeping with his daughter…

At The Vic the Carter’s pull together to get everything ready for the wake. Thinking about his family, Dean decides to give Shirley a chance however their reunion is short lived when Shirley is preoccupied by Stan’s meddling and Dean storms out. 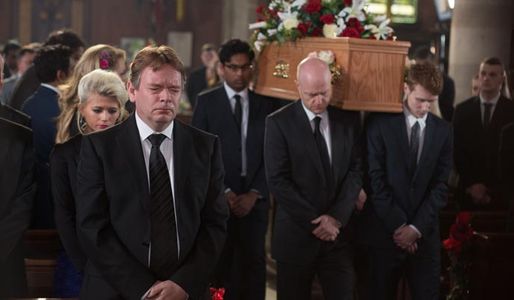