Phil hides a bag of cash in The Archers but later returns to find Ben and Jay have found a Kathy’s sunglasses. After Ben teases him about having another woman, Phil snaps. Back home, Phil finds Sharon wanting to speak to him but she soon changes her mind when she senses his mood. However, Phil is soon left panicking when he comes downstairs to find Sharon holding his phone asking who “K” is...

Shabnam begins to make preparations for the nursery but is taken aback when Kush reveals the decorating will have to wait as he plans to go on his stag do abroad. At the café, Shabnam tries to talk to Stacey about the situation but it soon becomes clear Stacey has other things on her mind as she opens up about taking her medication whilst she is pregnant. Outside, after talking to Martin, about Kush’s stag do Shabnam heads to the flat to confront him. However, she is stunned to find Kush decorating the nursery admitting that the Stag do was a cover for his surprise. They are soon interrupted by an upset Carmel who is looking for a place to sleep. Elsewhere, Stacey confirms an appointment with the midwife. 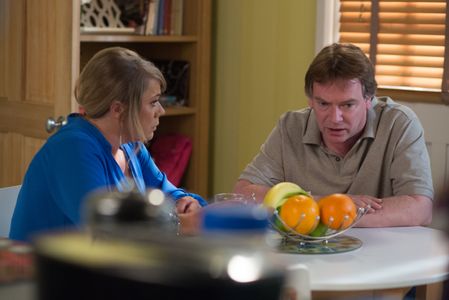