Jay enlists the help of a friend to organise a house party for a reluctant Ben on his 21st birthday. As the party kicks off, Jay is thrown. As the night continues, Abi winds up Johnny about having a crush on Ben but as she plays matchmaker, both deny they fancy each other.

Whitney and Mick work together to host a quiz night at The Vic and a determined Kim rallies together a team. Meanwhile, Denise refuses to join Kim at the pub but after bumping into Kush, she agrees to join him for a drink. With things off to a disastrous start for Kim’s team, Denise and Kush join. Outside, Kush walks Denise home.

After talking to Stacey, Max tells a shocked Lauren he wants to build bridges with Steven.

Lauren prepares for a night out in town with Whitney but as they arrive at the bar, Whitney realises why they are really there. Outside, Whitney gives Lauren a harsh reality check about her actions and makes her think about what she really wants.

Michelle is overjoyed when Preston returns but as he tries to give her a romantic day, she learns some disappointing news. With the stress building for Michelle, an argument quickly ensues between her and Preston and he storms off;turning his attention to Bex instead. Martin finds an upset Michelle at the allotments and offers her some supportive words.

Mick is left to watch Sylvie and is relieved to hear Tina has started speaking to social services about finding her a home. Elsewhere, when Max doesn’t turn up for their arranged drinks, Steven instead goes to visit him and help with the children.​​ 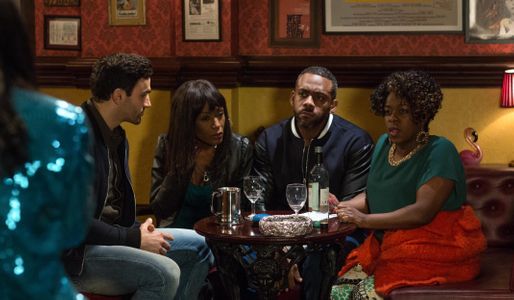 Eastenders 21/03 - Stacey is back in the Square