Eastenders 21/07 – Patrick is on the warpath

Patrick is on the warpath following his discovery that Ian spent the with Rainie night that Lucy was murdered and issues Ian with an ultimatum - either tell Denise by tonight or he will. After threatening Rainie, Ian panics and with his deadline looming, he plans them a spontaneous trip to Oxford to see Libby in a ploy to get Denise out of Walford. Meanwhile, Stan and Cora are up to their usual tricks and persuade a distracted Patrick to host a dominoes match. With time ticking on, Patrick storms out to see Ian driving Denise out of Walford; a frustrated Patrick calls Denise and leaves a voicemail on her phone before suddenly collapsing…

At the Butchers’, Carol receives a letter confirming her double mastectomy will take place next week. Carol worries that she won’t have enough time to get everything done before then but the family rally round and assure Carol that they’ll cope. Meanwhile, Lee tries to woo Whitney but is once again knocked back.

Sharon and Dennis’ relationship is strained following recent events and keen to get Sharon better, a caring Phil encourages her into taking her anxiety tablets. Sharon is hesitant, given her history of pill addiction but takes a tablet anyway. However, after some advice from Linda, Sharon throws the pills away without Phil knowing and mends her relationship with Denny.

Elsewhere, Tina and Tosh near their target for their first appointment at the fertility clinic, with Tosh blissfully unaware of Tina’s unorthodox methods of making the extra cash. Meanwhile, Aunt Babe warns Tosh there will be hell to pay if she hurts Tina. 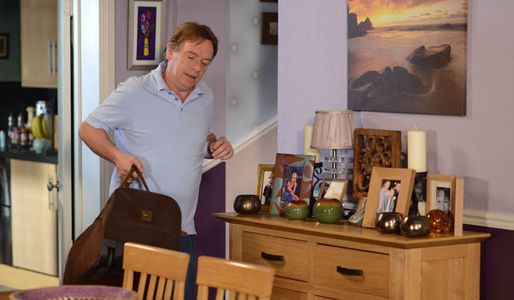 Eastenders 21/07 - Carmel Questions Max, But Will She Believe Him?