It’s the night of the stag do and Ian has organised party games in The Vic, but Alfie is in no party mood and he can’t stop thinking about Kat…

Realising Kat will be alone on the night of Roxy’s hen do, Bianca turns up with a bottle of wine. Kat tries to convince Bianca she’s ready to move on, but can’t hide her true feelings very well…

Later Kat is surprised to see Alfie at her door. He tells her he still has feelings for her and they start to kiss, but Kat pulls away, feeling torn.

Roxy gets in the party spirit at her hen do and sees that Ronnie has made a huge effort in organising the night, but the pair end up having a huge argument about Alfie and Kat. A drunken Roxy finally snaps and she tells Ronnie not to come to the wedding.

Bianca convinces David to take Terry along to Alfie’s stag, and they get to know each other better.
​
Kirsty turns up at The Vic drunk and tries to get Max back, but he’s unimpressed and tells her that he isn’t going to change his mind. 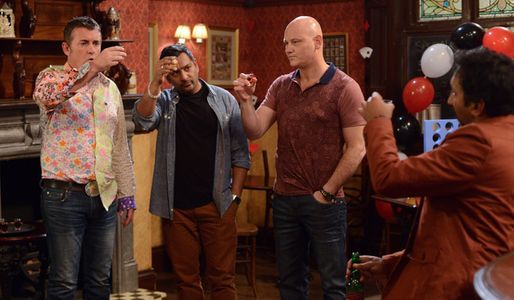