The Mitchell family reel from Ronnie’s arrest and share some harsh home truths with Roxy. With the lunch in chaos, Roxy comes to blows with Sharon but she is kicked out by Phil and told she is no longer a Mitchell. Phil sets out to fix the mess but after bumping into Shirley who realises Phil has been drinking, his plans quickly change. It doesn’t take Jay long to realise that something isn’t right and he later finds Phil drinking in The Albert. Jay does his best to get the scotch away from Phil but with no luck, turns to Billy for help. Meanwhile, Sharon heads to The Vic with Aunt Sal but after talking to Shirley, goes to The Albert where she finds a drunken Phil.

Arthur arrives at Vincent’s and spots something suspicious in the safe which has been left open. As Arthur sneaks something into his pocket, Kim arrives and takes a look in the safe. Honey tells Billy it’s her or the Mitchell family – what will he decide?
​
Carmel and Denise head to the police station and speak to the police officer who visited Denise’s house but are unable to find out who was involved. Back home, Denise is stunned when Kim reveals she’s splitting the house in two and selling her share. 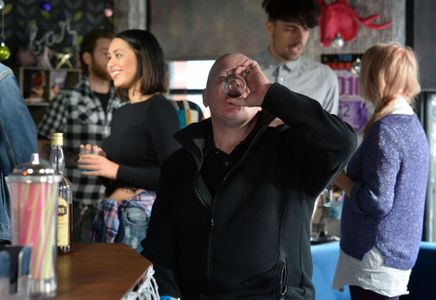