It’s Christmas Eve in Albert Square and Lee and Nancy are reeling from what Dean has said. A riled Linda tells Mick that Dean isn’t welcome on Christmas Day. When Stacey tells Dean to stay away from her and Lily, Dean storms over to The Vic and corners Linda, warning her that he’s had enough of her supposed lies and he blackmails her into telling Stacey it was a mistake – otherwise he will tell Mick. Linda agrees but on one condition – Dean stays away from the Carters and The Vic.

Romance is in the air at the Beales as Jane and Ian wake up in bed together. Jane tells Ian she doesn’t want anyone to know but an excited Ian lets slip to Alfie who quickly spreads the gossip. When Jane learns everyone knows about her and Ian she’s fuming. At the allotments, Alfie finds Jane and apologises but he reminds her that Ian likes to show off as he’s proud to have Jane back.

After all their practicing, the Walford Community Choir takes their position in The Square and start the concert. Ian is annoyed when Phil arrives and purposefully tries to put him off. Mick tells Dean he’s going to propose to Linda tomorrow… 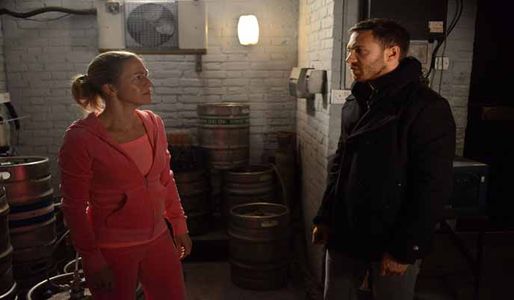 Eastenders 24/12 - Dot Closes Up For The Final Time