It’s the day of Kush’s stag do and with the men off playing paintball, Shabnam invites friends over with her Aunt Fatima to prepare her Mendhi dress. However things are off to a rocky start when Denise and Carmel begin to drink leaving Fatima unimpressed. Outside, Stacey spots the stag do returning and after bumping into Martin, learns about his conversation with Sonia forcing Stacey to take matters into her own hands and confront her. However as Sonia explains herself, Stacey is left rattled by her words – is Sonia right about Martin?

Back in The Vic, Mick’s surprise for the stag do – isn’t going down too well and tensions rise when Stacey arrives to find a very drunk Martin. After a conversation with Shabnam, Stacey returns to fetch him but bumps into Kush who tells her she has to make the decision about her and Martin’s future. Meanwhile, Shabnam heads to Kush’s flat but gets more than she bargains for when she finds Masood and Carmel in bed together.

Elsewhere, as Sonia worries that Lady Di doesn’t like her, Carol reveals Dot will be out of prison soon and suggests they should do something with Nick and Jim’s ashes giving Tina an idea. Later on, Tina suggests to Mick and Shirley they head to Billingsgate to spread Stan’s ashes but Shirley says she’ll give it a miss. At The Vic, Whitney receives a worrying letter – what is it about? 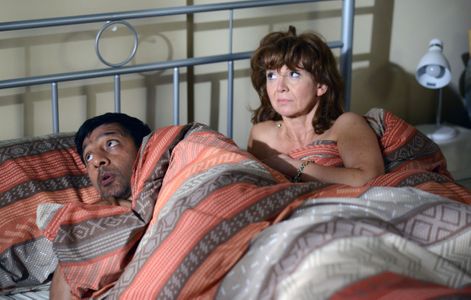