Eastenders 26/08 – Denise is worried about the social worker

Denise is worried about the social worker visiting when she accidentally cuts Patrick whilst shaving him. Meanwhile at the police station, Ian and Peter’s hopes are crushed when the police tell them that they haven’t found the person they believe is responsible for Lucy’s murder. At home, even with a few hitches the social worker is pleased with Patrick’s living conditions. Elsewhere, Ian visits Mick who delivers his ultimatum. Meanwhile, Cora visits Patrick to apologise for her behaviour but is thrown out by Denise for bringing alcohol. Ian fails to tell Denise the truth and as she goes to return Cora’s phone which she left at the house, Mick arrives to tell Ian he needs to tell Denise immediately as Rainie is on a war-path. Ian rushes to catch-up with Denise but is he too late?

Cora opens up to Stan about her troubled relationship with her daughter and reveals the prostitute Mick slept with was Rainie. Meanwhile, Rainie heads to The Vic demanding the Carters give her money to stay quiet about sleeping with Mick. Mick reminds Rainie that he didn’t sleep with her. Linda finally cracks, revealing to Nancy that Mick lied to protect Ian. Nancy is clearly upset about her parents’ deceit and storms off, while a desperate Rainie heads to Cora’s.

Peter is downhearted when Lola doesn’t understand his point of view so he turns to Lauren. Knowing how much they have in common Peter kisses Lauren and tells he loves her but does Lauren feel the same way?
​
Tina challenges Tosh on her sudden change of heart, forcing her to reveal she’s worried she won’t be a good mother. However, Tina convinces Tosh to go to their appointment and they return in good spirits. 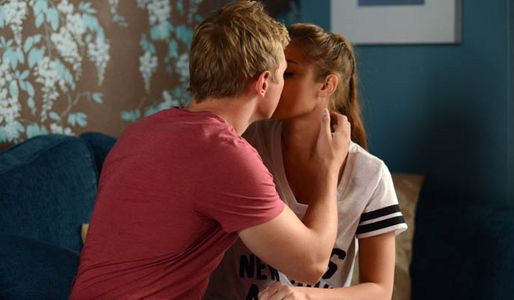 Eastenders 08/11 - Patrick Encourages Libby To Give Denise Another Chance