Tensions are high at the Mitchells’ when an injured Phil refuses to open up about what's happened. Things continue to go downhill when Phil collapses. As the ambulance arrives, a worried Kathy turns up but she is soon sent away by Sharon. At the hospital, Marsden arrives to talk to Phil but despite her explaining the severity of what's happened, Phil insists he doesn't need her help. After Phil has a heart-to-heart with Sharon, Ben arrives and apologises to his dad for everything that's happened. Kathy turns up but she is quickly forced to leave by Phil. When Ben returns, he finds a fragile Phil struggling to come to terms with everything that's happened - what did Gavin do?

Kush and Shabnam celebrate their happy news but after learning that Masood's father has had a heart attack, Shabnam decides not to tell her family. With Masood heading away to visit his father, Kush suggests they should postpone the wedding but Shabnam insists it's happening next week. Later on, Martin and Stacey arrive to celebrate but after spotting something on the laptop, it suddenly dawns on Kush the real reason Shabnam wants to get married so quickly. At the chippy, Martin confronts Kush about his sudden change of mood and Kush tells Martin the wedding is off. 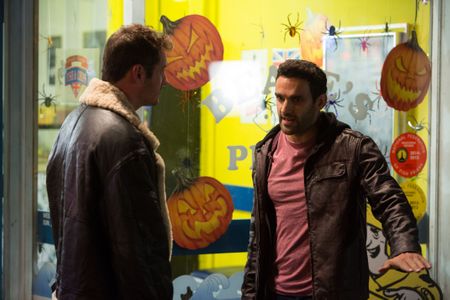