It’s the morning after and a broken Sharon still refuses to let Phil out of the room. Determined to have another drink, Phil finds a bottle wrapped up for Christmas and begins to drink. Sharon is later startled when she finds the bottle and a drunken Phil lashes out at her injuring her ear. As Sharon locks Phil back in the room, Phil says some viscous words –is their marriage over?

Meanwhile, it’s the day of Linda’s hen party but Linda is left disappointed when Sharon makes an excuse not to go. However with Phil’s words playing on her mind, Sharon later surprises Linda with a nineties themed party at The Vic. As the party begins, Linda can see through Sharon’s facade and upstairs, demands to know the truth about what’s going on. After the pair have a heart-to-heart over everything, Sharon forces Linda back downstairs to her party and tells her she’ll wait upstairs. Surrounded by happy couples, Sharon makes a phonecall…Phil crumbles under the pressure of not having a drink.

Elsewhere, Vincent confronts Arthur over the missing item from the safe.

Shabnam and Kush return from their honeymoon and head to The Vic where they see Stacey. Denise opens up to Carmel. Lee offers help to Cora but will she accept it? 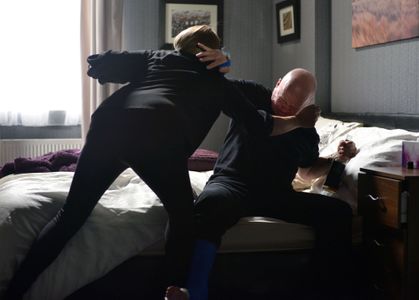