Its judgement day for Max as his fate is about to be sealed but will Max be convicted for a murder he did not commit or will justice prevail? Those who know the truth are desperate to do everything they can to get Max freed, even if it means breaking the law, but is everything all that is seems? With the pressure building, Max makes a rash decision that could affect everything…

Lauren is at breaking point not knowing if she should speak up and tell the truth for her father or stick to the agreed plan but what will she decide?

Meanwhile, on the day of Phil and Sharon’s anniversary, Phil is desperate to get their marriage back on track and he goes to great lengths to make sure he gets what he wants by making a deal with Jane. However, when Jane realises she may not be able to persuade Sharon to give Phil another chance in return for his favour, she takes a risk and lets Sharon know what’s going on.

As the gossip spreads around Albert Square, Stacey pays a visit to Max to find out if what she heard in court was true. Meanwhile, Carol declines Robbie’s offer to move to Milton Keynes. Later at the café, a supportive Sonia shares some encouraging words to Robbie.

It’s been one year since Linda’s attack and Mick struggles to see Dean carrying on with his life as normal. After a conversation with Shirley, Mick realises he needs to be with Linda but as he prepares to leave, he is surprised to see Linda return home from Spain. 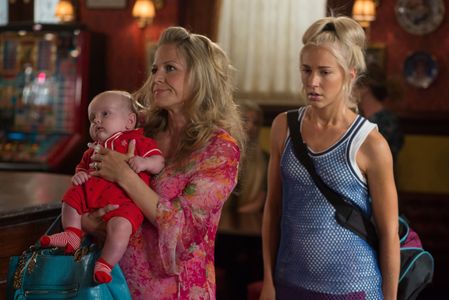