The Carters struggle to get their heads around the latest changes made to The Vic by Fi but their minds soon turn elsewhere when Whitney makes a surprise return. As Mick reels from seeing Whitney, Shirley struggles to hide her displeasure. Things grow even more awkward for Whitney as Johnny insists she moves back into The Vic and with Mick supporting the idea, she eventually agrees. After Mick offers Whitney her job back, a fuming Shirley confronts Whitney who is quick to stand her ground, leaving Shirley to face the fact that she is back. Upstairs, Whitney reveals some surprising news – she’s engaged.

Steven panics when Lauren forces him to go to the hospital leaving a smug Abi with Louie. Steven tries to buy himself some time and as they wait to see someone, he desperately calls Abi for help.

Bernadette is put out when she realises they can’t afford to buy her baby luxury items. Outside, Bernadette comes up with an idea...
​

Karen is fuming when she learns of her daughter’s actions but comes round when she realises the real reason why. Max takes Carmel for a drink at The Vic. 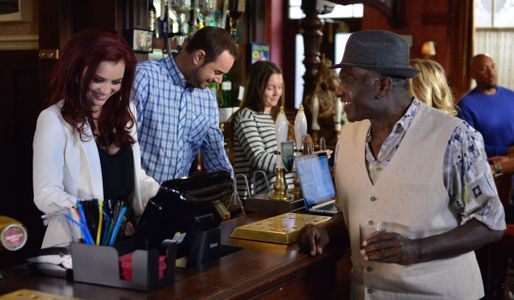