Libby’s party comes to an abrupt end when a battered Vincent arrives home and refuses to be honest about what happened. The tension rises when Claudette tells Kim she’ll take care of him and it doesn’t take Claudette long to realise it was Phil who attacked her son. After Libby leaves, Denise and Patrick confront Kim about Vincent’s behaviour and encourage her to end their relationship. Vincent pleads with Kim to give him another chance but a strong Kim sends her husband on his way. Outside, Denise and Libby have a heart-to-heart but after Libby says goodbye to her mum, she tells Chelsea she couldn’t tell her – what is she hiding? Later on, after some words of wisdom from Ronnie, Vincent returns and begs to speak to Kim but he is stopped by Claudette who tells him to give her some space. As Vincent insists he’ll get revenge on Phil, Claudette suggests he backs off – Phil will get what’s coming to him.

Meanwhile, an angry Dean confronts Roxy about not showing up to the party but Roxy is quick to turn Dean’s mood and the pair soon find themselves sharing a kiss. However things take a turn when Ronnie spots them together and back home, demands that her sister breaks things off with him. Although Roxy is reluctant, she calls an angry Dean and tells him it’s over.

Elsewhere, Donna spots Pam’s odd behaviour and tells her to step up and stop being a pushover. Taking matters into her own hands, Pam suggests to Les they invite Claudette to dinner but she is quickly shut down. Later on, Pam arrives home ready for an evening with her husband but is upset when he is nowhere to be found. 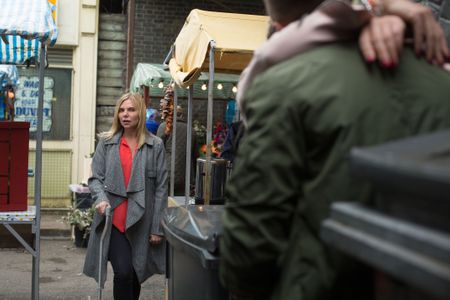