Eastenders 7/09 - ​Dot is welcomed back to Albert Square

Dot is welcomed back to Albert Square but she grows frustrated by the fuss and goes missing when her probation officer is due. Ian finds Dot hiding in the launderette and the pair have a heart-to-heart over everything that has happened. When Dot admits she wishes she had turned Nick into the police for his own benefit, Ian soon begins to have doubts about his own decisions - is he doing the right thing for Bobby? With Dot's Parole Officer satisfied with her situation, she asks her friends and family to give her some peace. As she sits with Jim's urn and shares some emotional words, a police officer arrives with Cora who barges in and makes herself at home.

Meanwhile, tensions are high at the Beale’s when Jane admits she can’t watch an innocent man go to prison and suggest they call Marcus to see if they can help Max but Ian refuses. After his conversation with Dot, Ian agrees to meet with Marcus and give Max an alibi but he is stopped when Bobby is sent home from school after getting in a fight. Torn, Ian makes a shocking decision and in the middle of the night and leaves Albert Square with Bobby.

Meanwhile, Ronnie attempts to talk to Roxy but they are interrupted by Dean who comes to blows with Ronnie. When Vincent overhears Dean threatening Ronnie, he sends him on his way and walks Ronnie home, much to Charlie's annoyance. Elsewhere, Whitney covers for Lee when he is nowhere to be found. After he returns, Lee reveals he's been asked to testify in the Lucy Beale trial 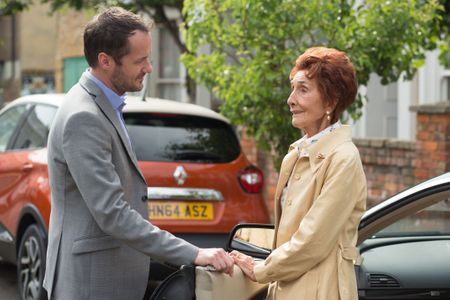