At the Woolpack, Leyla makes a veiled blackmail attempt about the ‘insurance scam’. But it’s not long before an angry lady called Tina arrives at the pub and throws a drink over Alicia, accusing her of screwing her out of her husband’s inheritance. Taking this in, Leyla works out where Alicia’s money has come from. Leyla is livid with Alicia and David for ripping her off. But how far will she go to get what’s owed to her?

Val is touched to find out the village have boycotted Tiny in support of her. Their support gives Val an idea and soon Pollard is shocked to learn his wife wants to give a talk to their B&B guests about her HIV. Diane and Victoria suggest she widen the audience and deliver it at the pub instead. Later, despite being daunted at the prospect, Val bravely begins her talk about living with HIV. How will her speech be received?

Kerry remains determined to win the wedding competition and begins her a webcam video in her newly acquired wedding dress. Dan interrupts her but can Kerry cover her tracks with Dan still unaware of her hopes?

Donna’s hunt for somewhere to live continues and when Rhona offers to have April for a sleepover Donna asks a favour. Edna isn’t happy to learn Ruby plans to put the money towards their ‘baby fund’. 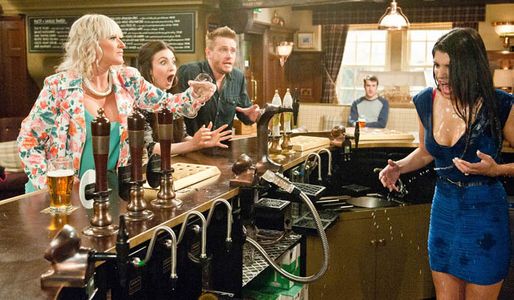