Emmerdale 27/08 – Is it time for Aaron to stop running from the truth?

Adam tries to convince Aaron not to turn himself in, offering to go on the run with him. Adam is relieved when he thinks he has managed to dissuade his friend but later, when Aaron is nowhere to be seen, Adam realises he is doing the unthinkable. A guilty and fearful Adam informs Chas and Paddy. Meanwhile, Aaron pauses outside the police station, wondering if he’s doing the right thing. Will he be able to go through with it? And will Adam really be able to stand by and let Aaron take the wrap for his wrongdoings?

Marlon continues to struggle with his emotions and the complexity of the situation, snapping at Bob when he suggests April should be allowed to go to the funeral in order to help her understand that Donna isn’t coming back. Later, Marlon goes through his eulogy with Laurel and she worries she cannot compete with a dead woman. It seems Marlon is not the only one struggling to come to terms with things when, at the Woolpack, Diane orders Debbie to have a word with Ross who is nursing a bottle of whiskey and glowering over at Marlon. Will Ross stay silent about Donna? Will he reveal all about her and Marlon’s illicit kiss?

Ashley tells Harriet he thinks he and Carole should just be friends, but will Ashley be able to let Carole down gently? Sean’s attempts to reconcile Dan and Kerry backfire. 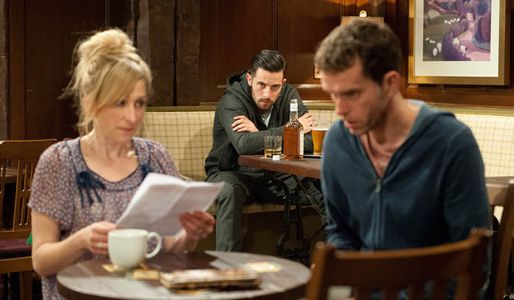